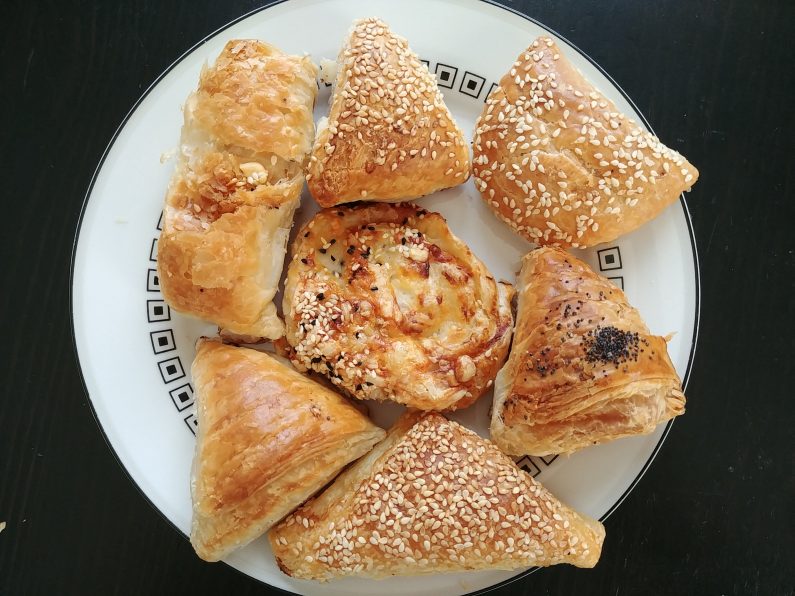 Bourekas are one of those foods that are uber-popular here in Israel, and becoming better-known around the world. But many people don’t know their country of origin — Turkey — and even fewer know that they were actually invented by Turkish Jews. Bourekas (or burekas or borekas or however you choose to spell them) are actually a true Jewish Food, as I mentioned in this post, and not only because we invented them. I don’t believe that is enough of a reason to classify something as a Jewish Food, as I wrote there.

Bourekas, however, are a Jewish Food because in addition to being invented by Jews, they also reflect Jewish History.

Before I get into the history, I need to describe bourekas, for those who may be unfamiliar.

In broad strokes, Bourekas are pastry turnovers, typically around 3 inches in diameter, filled with a variety of usually savory stuffings, such as potato, cheese, spinach or mushrooms. They are crispy, sometimes are topped with seeds of some kind, can be eaten warm or at room temperature, and are one of the more delicious and tempting street foods in Israel.

Bourekas also make up one part of the classic trio of Sephardic Jewish pastries, affectionately referred to as “The Three B’s” — bourekas, boyos and bulemas. (I considered including them all, along with the ways to differentiate between them, in this post, but realized it would be way too long. Look forward to a separate post or two on that topic, while I stick with bourekas alone in this one.)

Some of the classic fillings that appear to have dropped from popularity (at least as a mainstream baked good in Israel, though probably remaining in the homes of Sephardic Jews around the world) include pumpkin or winter squash (particularly for Rosh Hashana and Sukkot) and eggplant. Meat-filled bourekas are not uncommon on Friday nights, but typically are homemade and not purchased in commercial bakeries.

So What Makes Bourekas Jewish?

As Gil Marks writes in his Encyclopedia entry on bourekas, like most Jewish Foods, they are “a synthesis of cultures and styles; over the course of history, they have been transformed and transferred, on their way to becoming a ubiquitous treat in modern Israel.”(1)Encyclopedia of Jewish Food, Gil Marks

Basically, Jews have spread all over the world. (I actually checked, and you can easily dig up at least some mention of a Jewish presence in nearly 90% of the countries of the world. And of those you can’t, many are tiny island nations of the Pacific, or remote countries of central Africa with a Jewish presence in other nearby nations.) When you move from one country to another, you miss the food you used to eat, and you continue as best as you can to keep making it. But sometimes, a special magic happens where you discover something in the new country and mix it with one your foods from the old country to create a new food. That’s what bourekas are!

Although there were Jews living in Turkey since ancient times, the majority of the Turkish Jewish population descend from the Sephardic Jews of Spain who moved to the Ottoman Empire after they were expelled from Spain in 1492. When the Catholics kicked the Jews out, the Muslim Turks welcomed them in. And they kept cooking Spanish foods. Can you think of a Spanish food that kind of resembles a boureka? (In particular, look at the top right boureka in the main picture for this post — the most “genuine” boureka of the lot.) A handheld pastry turnover with stuffing inside?

Empanadas! The empanada comes from Spain and subsequently spread to Latin America (where it is very popular) and other areas with Spanish heritage. They often have meat and vegetable fillings inside. Now here’s where things get interesting.

The Spanish Jews kept cooking empanadas in Turkey. But right around the same time that they arrived in the Ottoman Empire, there was another food that was becoming all the rage there. Called borek, it was a modification of a filled hand-pie (called burqa) that the Turkic people knew from their origins in central Asia. One of the newest Turkish culinary inventions at the time was a paper-thin dough called yufka, very similar to what we know today as filo/phyllo pastry. (Yufka is hand rolled and slightly thicker than filo, which is stretched.) Yufka replaced the previous dough of the burqa.

While the Sephardic Jews were fairly welcome and comfortable among the Ottomans, they still kept somewhat apart without fully integrating. And so they were slow to adopt Turkish foods. Still, after approximately 150-200 years, they basically looked at the borek, saw that they had wonderful fillings, and decided to stick borek fillings into their empanadas. And thus, the boureka was born. This way, they got a finger-food version of the borek, and a non-meat version of their empanadas (allowing them to eat it with dairy meals as well).

Two main things differentiate a borek from a boureka:

These days there may be some fillings common in a boureka that aren’t found in borek, or vice versa. But that’s a newer development.

Names Can be Confusing

I just wrote that bourekas are typically made with a dough that is similar to that of an empanada, and many of you may be saying, “No they aren’t! They’re made with filo or puff pastry.” But that is part of why I also wrote above that the one in the top right of the plate is the most “genuine.”

Because bourekas (like the other classic Sephardic pastries) gradually spread far and wide throughout the Judeo-Spanish diaspora, to many countries with different mother tongues, and because these were typically homemade, folk-type recipes, the name did not always remain the same. As Joyce Goldstein wrote, “The name game is challenging. Depending upon where people lived, or family traditions, the identical recipe may go under a variety of titles.”(2)Sephardic Flavors: Jewish Cooking of the Mediterranean, Joyce Goldstein

For example, Claudia Roden(3)The Book of Jewish Food, Claudia Roden points out that in Italy these are known as burriche, with different standard fillings. The name Borekitas is used for a specific type of boureka that is always filled with cheese and often has cheese or yogurt in the dough,(4)The Jewish Kitchen: Recipes and Stories from Around the World, Clarissa Hyman though pastries of a similar style are known in Izmir as handrajos.(5)Sephardic Flavors, Goldstein Meanwhile, Bourekakia is a Greek name for one that is filled with meat.(6)The Cookbook of the Jews of Greece, Nicholas Stavroulakis

True purists only use the term boureka to describe the small hand-pies with the empanada-esque pastry. Puff pastry is a later invention, and thus also a more modern innovation for this dish, mainly for convenience, and thus not a traditional pastry. If filo-type dough is used (as in the triangular type at the bottom of the main picture), traditionalists differentiate it by calling it fila or filica. Others use some variation of ojaldre, holjadre, rojaldre or the like.

And if all that wasn’t confusing enough, here in Israel the single term boureka is all-encompassing, describing all types of these handpies, and even the larger Turkish borek types (referred to here simply as “Turkish Bourekas”). And the “s” that makes it into a plural isn’t understood by most Israelis, so bourekas became a singular word, and the plural is the Hebrew bourekasim. (Israelis make the same mistake with other words as well, so that you can order “one brownies,” for example.)

I may have confused you with all of that, so now I want to help ease that confusion, at least for those of you who come to visit in Israel and want to buy bourekas without looking like a yokel.

As you can see from the main photo, there are many types of bourekas in Israel, and they come in a wide variety of shapes and with various toppings. (I bought all of those from a single store in Jerusalem’s Machane Yehuda Market.) So how do you know what’s inside without badgering the store’s employees?

My friends, there is a code! It isn’t a secret (though if you look online, people who write about it don’t always get it right). But those different shapes and toppings are actually what tells you the filling. Now since I don’t like spinach, I didn’t buy any of those, and a few of the ones in the picture are unique or new-fangled ones from this store. And yes, occasionally a store breaks the code, so it isn’t 100% foolproof. But still it should work most of the time.

Follow along with the main photo, and learn! In the center, is the easiest to identify. That’s a newer type of boureka with pizza sauce and cheese. It is round, flat and has cheese on top. (In this case, they had a regular pizza one which I didn’t eat due to the olives, which I also don’t like. This one with the black nigella seeds on the side is to mark it as pizza with kashkaval cheese instead.) Below that, at the very bottom, the filo triangle with sesame seeds has cheese filling. This is one of the most standardized ones you’ll find nearly everywhere. Above it to the right, the more puffy and thick triangle with poppy seeds contains mushrooms. And above that, the classic half-moon shape with short pastry dough has a saltier cheese filling.

The other three on the plate don’t follow the “rules” closely, and I’m even going to ignore the two on the left (both cheese variations that are non-standardized). The one on the top that is the same shape as the mushroom, but has sesame seeds on it, in this case is potato-filled. This is abnormal — almost always, potato bourekas are rectangular in shape, sometimes with sesame seeds, sometimes not. And spinach (as I said, not pictured) is typically in a small spiral or ring shaped pastry.

So there you have it! All you ever wanted to know about bourekas (and the many related pastries), as well as its little-known Jewish history. Bottom line, if we didn’t move from Spain to Turkey, there wouldn’t be a boureka in the world. And as any of you who have had them will agree, that would be very sad.

Leave it to me to find a culinary silver-lining to the Spanish Expulsion!