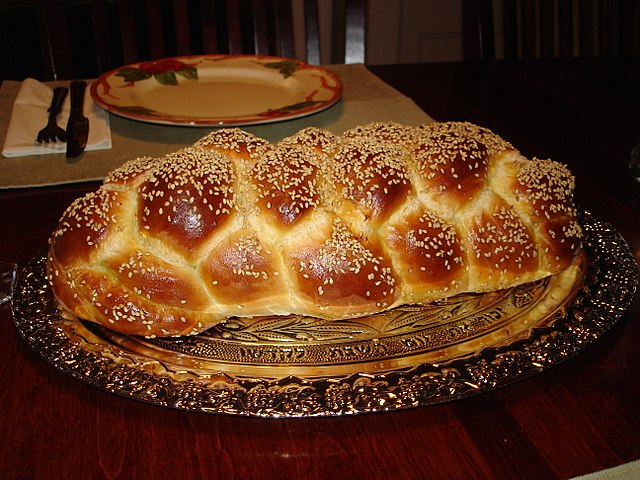 I’m inaugurating a new feature here at the Taste of Jewish Culture! A Jewish Food trivia Quiz! I’ve included ten questions, which I hope will be challenging but not too much so, and also lots of fun. But let me know what you think so I can improve for the next time around.

UPDATE: Early feedback is that this quiz is very challenging. I promise to go for somewhat easier the next time around! But try this one anyway — you’ll learn a lot when the answers are revealed. Also, the answers to many, though not all, of these questions can be found in prior posts I have written for this blog! 🙂

Great job! You are a true fresser!

Get back into the kitchen (or library)!

#1. Which of the following popular Israeli foods traces its origin to Iraq?

Sabich is made of thinly-sliced fried eggplant, hard-boiled egg, and techina. It was typically eaten in Iraq as a Shabbat morning breakfast food.

#2. Which of the following foods is NOT typically eaten for Passover? ? Passover is called Pesach in Hebrew, and celebrates the Exodus from Egypt.

Although tadigh is made with rice, many non-Ashkenazi Jews eat rice on Passover. Megina is a Sephardic matzo-and-meat pie. Couscous, however, is made of semolina flour, and is thus considered chametz — leavened grain — which is not permissible for those who follow the traditional Passover food rules.

One of the best books off of the Jewish Food Bookshelf, Roden’s The Book of Jewish Food is a classic that mixes recipes and essays about Jewish foods from communities around the world.

#4. Kugel originated in which country? ? Kugel typically combines a starch, a fat such as oil, and eggs, without added water.

Kugel started as a basic dough ball cooked inside of a Shabbat stew, and only later emerged from the pot and splintered into various types of starchy foods.

#5. Which of the following types of kubbeh is typically served as a soup? ? Kurdish in origin, kubbeh (or kibbeh) typically combines seasoned ground meat with a dough made of bulgur, rice flour, or semolina.

Kubbeh Hamusta is served in a slightly sour soup. Kubbeh Nayeh is a raw meat dish. Nablusia is fried and Bil Siniya (meaning “on a tray”) is a baked kubbeh. Kubbeh Za’atar adds the popular Middle Eastern spice blend to a fried kubbeh.

#6. Many Ashkenazim typically eat kreplach on which of the following minor Jewish holidays? ? Similar to wontons or ravioli, kreplach are pasta dumplings with meat inside, often served in a soup.

Kreplach are traditionally eaten for the pre-Yom Kippur meal, on Purim, and on Hoshana Rabbah (the seventh day of the Sukkot holiday).

#7. Which of the following American deli classics is NOT considered kosher by traditional Jews?

Since the Ruben combined corned beef and Swiss cheese, it mixes a dairy product with meat, forbidden by the traditional laws of kashrut. Still, it was invented in Jewish delis in the United States. Although French Dip is sometimes served with Swiss Cheese as well, the original version did not contain that ingredient.

#8. Which of the following is a type of Jewish bread?

Kubanah is one of the classic Yemenite Jewish baked goods, served typically on Shabbat.

#9. Which of the following alcoholic spirits is Jewish in origin?

Mahia is a Moroccan Jewish spirit distilled from figs and flavored with anise. Many Moroccan Jews had their own homemade mahia.

#10. Which of the following is NOT a type of Shabbat stew? ? Shabbat stews are dishes prepared on Friday and left to cook through the night to be eaten hot for Sabbath lunch.

Shabbat stews are the topic of the book I am writing. Skhina is Moroccan, Osavo is Bukharan, Khalebibi is Persian, and T’bit is Iraqi. Mamaliga is a Romanian porridge made of cornmeal, that is similar to polenta.