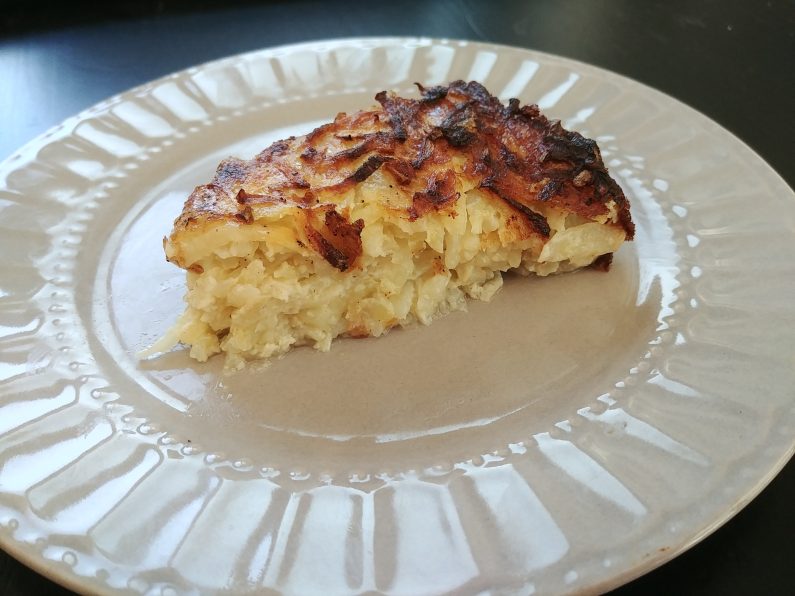 Although I strive to shine a light in my research and writing on a wide array of non-Ashkenazi Jewish Foods, as I discuss in my description of this site, that doesn’t mean I plan to entirely ignore Ashkenazi foods. There are many delicious Ashkenazi delicacies as well, typically falling in the heimish style, rather than the formal and fancy.

Plus, just as I want people to broaden their minds about the variety of foods that can be considered Jewish overall, I also want people to realize the diversity in Ashkenazi cuisine itself. I am bothered by those who use the term “Jewish Food” as a synonym for Ashkenazi fare. But I’m equally irked by cookbooks that distinguish between Algerian, Tunisian and Libyan versions of the same dish, but lump together the disparate foods of (for example) Germany, Poland, Hungary and Russia under the “Ashkenazi” label.

So throughout future posts, I hope you’ll be seeing all of that diversity, and will come to appreciate the specialties that each sub-cuisine brings to Jewish cuisine overall.

Today, I’m focusing on the classic, and probably familiar, Ashkenazi dish called kugel. I use the broader term “Ashkenazi” here, because the dish did spread throughout the whole of Central and Eastern Europe, morphing and taking on different forms and flavors in each different country.

With just a few ingredients, and generally homey flavors, most people consider kugel a “simple” peasant food. But despite its admittedly simple core, the dish’s historical development and variations, plus the myriad customs attached to it, make it decidedly complex.

Traditionally, kugel is usually referred to as a “pudding,” though consulting the best food reference book that I know, I see that even this term is hard to define or pin down, and that depending on which definition you use (and which country you are in), it may or may not apply to kugel. (Notably, that same Oxford Companion to Food does, in fact, refer to kugel as a “pudding.)

Typically a baked dish (though, as we’ll see soon, it was not always made this way), the dish combines a starch, eggs and a fat of some kind, typically with little else beyond some simple seasonings like salt and pepper. The Late Gil Marks, a bit of a Jewish Food guru of mine, points out in his excellent Encyclopedia of Jewish Food, “If the dish lacks any of the basic ingredients, it is technically a casserole, quiche, or cake rather than a kugel.” And John Cooper quotes Edouard de Pomiane as pointing out that the key distinction is that kugel had no water mixed in with the flour and fat.

The two most popular starch bases today are potatoes (traditionally grated, though some cooks make more of a mashed potato variety) or lokshen, egg noodles. The lokshen version may be savory (typically including friend onions, salt and pepper) or sweet (with raisins and cinnamon, and sometimes made in a dairy variety including pot cheese in the mix).

The name can also be confusing, with various spellings and pronunciations, as makes sense considering the dish’s convoluted history. For example, the Jerusalem-based Ashkenazi food expert Shmil Holland (Hebrew link) points out in his appropriately named cookbook Schmaltz that kugel is the Lithuanian pronunciation and the Jews from Galicia (the area of southern Poland that at times has been under Austrian or Ukrainian control) pronounce it kiggel. There are other names and variations in different regions as well.

As stated earlier, kugel was not a baked dish in its earliest form. It was also even simpler in its ingredients. Kugel began its life as a simple dumpling.

The dumpling as an additive to extend the nutritional value of soups and stews became common in Germany in the 12th Century, approximately when Jews there began cooking chulent (the common Shabbat Stew, that I will definitely write a lot more about in the future, and about which I have delivered numerous talks in the past). So German Jews thought to put an egg-enriched bread batter into their Shabbat chulent.

In time, perhaps so it would be less likely to fall apart in the liquidy, long-cooked stew, they moved the pudding into a round clay pot which they rested inside of the chulent pot, allowing it to steam. Marks points out the name of the pot was a kugeltopf, meaning ball jar. Thus the shape of this early innovation’s cooking vessel gave rise to the name of the dish itself.

Through most of history, home ovens were very uncommon. Only in the late 19th to early 20th centuries do they begin to gain in popularity, and when they do, the next major development takes place. The kugel lept out of the Shabbat stew and directly into the oven, becoming the stand-alone baked (rather than stewed or steamed) pudding that we know today.

Interestingly, at times there was a return to the dish’s origin. Some people placed a simple ball of bread dough back directly into the chulent pot. There, it got the name “Shabbos Ganif” (Sabbath thief), since it stole (absorbed) the flavors of the stew itself.

The central starch base also developed over time. Originally it was simply flour based. Lokshen becomes popular in the region by the 16th century, and rice shortly after that. Potatoes were not common until the mid-19th century (they were barely eaten anywhere in Europe from their arrival from the New World in the late 15th century until well into the 18th), but after that they took Ashkenazi culture by storm. Cheap, filling, easy to grow, they were the food that fed the rapidly growing population of Eastern European Jews. Thus potato kugel also became most popular. A well-known Yiddish folk song jokes about the menu being potatoes every day, except on Shabbos, when you get potato kugel!

Marks even writes of a cornmeal-based kugel in Romania, where corn was the grain of choice. I wonder how exactly it would differ from an American-style cornbread (other than the lack of milk products), but I’d certainly be willing to give that a try!

There is no doubt that kugel has grown into more than just a popular Ashkenazi side dish. Passionate arguments develop over sweet vs. savory, lokshen vs. potato (almost as intense as the famous Latke vs. Hamantash or Floaters vs. Sinkers debates). 19th century German writer Heinrich Heine famously wrote to a new Jewish periodical that “Kugel, this holy national dish, has done more for the preservation of Judaism than all three issues of your magazine.”

In “Holy Kugel: The Sanctification of Ashkenazic Ethnic Foods in Hasidism,” Allan Nadler connects the rise in kugel’s popularity with Hasidism’s focus on avodah b’gashmiyut, serving God through material means. As a populist, anti-intellectual movement, Hasidism sought ways to empower the common Jew. And along with singing and dancing, the practice of ritualized eating also became spiritualized. Kugel became the ultimate “holy food” for the Shabbat, especially in the thriving regional mecca of the movement, Galicia.

When Jews moved from Eastern Europe to England and America, the kugel remained a popular dish. In fact, kugel appears (in its version within the chulent) in the first English language kosher cookbook (Judith Montefiore’s London-published The Jewish Manual) and the first in the U.S. (Esther Levy’s Jewish Cookery Book).

Perhaps more interesting, though, is how much kugel remained attached to Jewish culture even after secular Jews dropped kashrut. In 97 Orchard: An Edible History of Five Immigrant Families in One New York Tenement, Jane Ziegelman highlights the Council Cook Book, put out in 1909 by the Council of Jewish Women. Early American Jewish cookbooks are famous for the treif dishes they included, but this cookbook’s Oyster Noodle Kugel remains particularly surprising.

One of my favorite examples of kugel culture is a special type that was invented in Jerusalem. Yerushalmi (Jerusalemite) Kugel developed in the city in the early part of the 1800s. It is made with thin noodles, and the main flavorings are caramelized sugar and black pepper. I often rhetorically ask on my food tours, why was that the kugel that developed in Jerusalem? Because kugel is 100% an Ashkenazi food, but caramel and black pepper were not traditional Ashkenazi flavorings then. They were more the flavors of the East. Back then, Jerusalem was one of the only places in the world where you had Ashkenazim living side-by-side with Mizrachim, Sephardim and other types of Jews, and sometimes they even married each other! Take an Ashkenazi food and stick eastern flavors into it — that is Jerusalem! So I believe that Yerushalmi Kugel is Achdut Yisrael (Jewish unity) in your mouth.

And then I read in The Jewish Kitchen: Recipes and Stories from Around the World of a Hasidic rabbi, Pinchas of Koretz (in Galicia), who claimed that lokshen kugel itself symbolizes Jewish unity, since the noodles are all tangled together and are really inseparable, just like the unified Jewish people. How much truer does this become when a noodle kugel also mixes culinary influences from Jews of different origins!

As the kugel grew in popularity, a host of kugel-related customs developed. Like so many Jewish food customs, many reflect whimsical wordplay and/or imbue the food with symbolic significance that (usually) did not exist when the dish was first created. But these folk meanings and customs, rather than being dismissed as silly, should be seen as shining a light onto the mindset and values of those who follow these customs.

Rite and Reason: 1050 Jewish Customs and Their Sources mentions that some have a tradition of specifically eating a round kugel on Shabbat, reminding us of the manna the Jews received in the desert. We are to understand that the manna was in some way coriander-like, and coriander seeds are round. In Schmaltz, Holland also mentions the manna connection, where the Hasidim saw that the biblical phrase that describes it (Kazerah Gad Lavan – “like coriander seed, white”) made the acronym KG”L, thus “leading to” the source of the name kugel.

Holland also mentions a custom of eating as many types of kugel as there are Torah scrolls read in the synagogue that Sabbath (a number that varies based on special days in the calendar). There were also special kugels eaten for specific weeks of the year. Cooper points to a rice kugel after Passover, picking up on a German fertility belief. Marks writes that on the Shabbat when we read about Israel’s eternal enemies, the nation of Amalek, some Polish Jews ate four types of kugel that spelled out the nation’s name with the first letters of their Yiddish names: epl (apple), mehl (flour), lokshen (noodle) and kartoffel (potato). And Holland also tells of a special Dutch kugel that includes red wine (for the Red Sea) and wheat berries (for the manna) on the Shabbat that describes the Exodus.

Finally, though not “kugel customs,” I’d be remiss if I didn’t at least mention two interesting kugel variants. Potatonik is a Polish mix between a standard potato kugel and a bread. Lighter than a kugel, but more dense than a bread, potatonik mixes raw potatoes with flour and yeast for this hybrid starch base. Polish or Hungarian in origin, Yapchik is a more classic potato kugel, but with a delicious surprise inside. Sandwiched in the middle is a layer of beef that simply melts as it slow-cooks through the night.

Whatever type of kugel you eat, wherever the specific variety originates, whichever names you use and symbolic meanings you see in it, I hope you’ll enjoy this classic Ashkenazi food, that is ever so simple, and yet so complex.