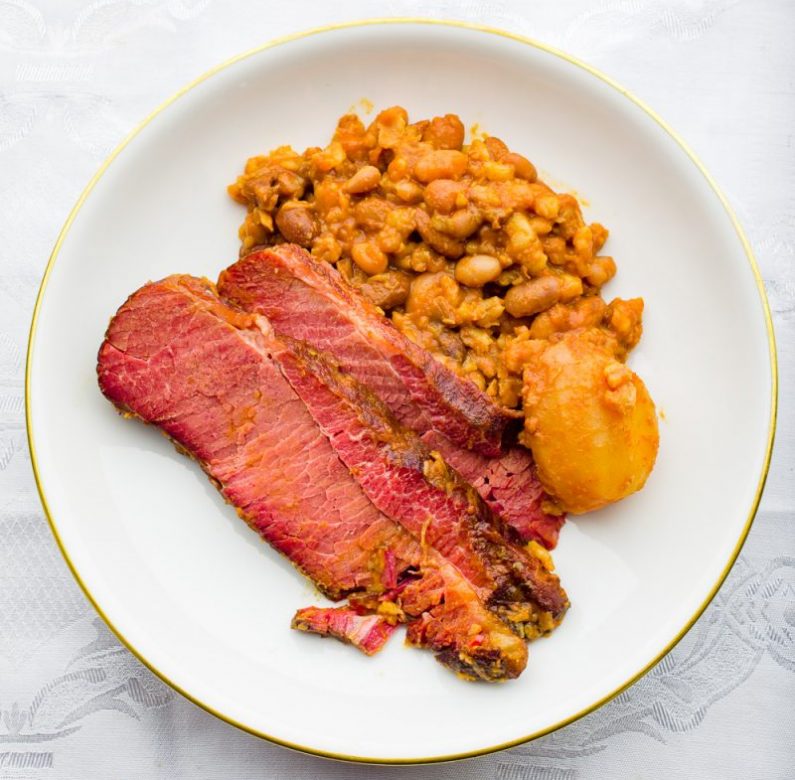 Studying Jewish Food history is interesting and exciting, especially when you uncover little-known facts and episodes, the more surprising the better. But as one of the most mobile nations in history (perhaps the most mobile), our people’s food has a history that is sometimes as complex as that of the nation itself. I recently encountered a great example while doing further research for my chulent book, and I thought it might be instructive and enlightening to share.

The overall theme of the book connects to the diversity of sub-communities within the overall Jewish nation. By focusing on the variations (sometimes rather minute ones) between different versions of Shabbat stew, I am able to differentiate between the distinct population from which it came. (By the way, though I used the term “chulent” in the first paragraph, throughout the book I generically refer to the different types by the collective term “Shabbat stew.”)

Currently, I’m in the midst of some final background research for the next chapter I’m writing, which focuses on Central Europe — Germany, Austria, Hungary and Romania largely. As part of that research, I came across the interesting food history website, Jewish Viennese Food, created by Nino Shaye Weiss. His posts, like mine, go into a significant amount of depth, so if you like that style, I recommend perusing his site.

As his specific area of expertise is not one of my stronger suits, I reached out to him and set up a conversation to discuss Austrian food. My first hint that I was about to uncover some interesting complexities was when he responded to my email that he is really an expert in Viennese cuisine specifically. “I’m thus not so much an Austrian as a Viennese. My cholent is from Vienna not from Austria.”

I read his post about the Viennese Shabbat stew, and prepared for our conversation. The most striking thing I noticed when reading his recipe was his prominent inclusion of paprika (both sweet and hot). This is a hallmark of Hungarian sólet (as the stew is called there), and while I certainly knew of the historical connections between what are now two countries, the culinary crossover still surprised me.

Austria, located in a central position in Europe, has always had something of a split personality (in my perhaps oversimplified understanding of its history). At times, it was one of the many German kingdoms and principalities, and was a part of the larger Holy Roman Empire (which as “Coffee Talk” famously told us, was neither Holy, nor Roman nor an Empire… discuss). Vienna was referred to as Germany’s largest city, and of course, German is still the country’s official language today. At the same time, once it became its own Habsburg-ruled empire, Austria controlled parts of what later became Hungary, Romania, Czech Republic, Slovakia, and Italy, among others, and its population was at least as diverse. In fact, in our chat, Nino figuratively referred to Vienna as the northernmost city of Italy! (I didn’t realize it until afterwards, but his chulent recipe also includes tomato paste — I wonder if that is the Italian influence, though it could reflect the Hungarian side as well.) So we see Vienna referred to as both a German and an Italian city!

So as I read its history, Austria in some ways considers itself German, in other ways not. And in all ways, it sees itself as 100% Austrian, with all the intricacies that entails. Thus, as one of this complex country’s minority populations, Austrian Jewry is a great microcosm of the complex Jewish people overall.

Nino explained the paprika in his chulent (which to him was such an obvious ingredient that he didn’t even see it as noteworthy). With most of Vienna’s Jews murdered during the Holocaust, and with few of the survivors wanting to return to the horrific memories the city held for them, most of Vienna’s 10-20,000 Jews today do not descend from pre-war Austrian Jewry. The majority of the Ashkenazi population came from Hungary (as did Nino’s family). They are thus Austrian Jews of Hungarian origin. He told me, however, that this is the type of chulent he’s eaten in many homes throughout Vienna.

This reminded me of a recent conversation I had with my friend Jonathan from Berlin. His family has been there for quite some time, so I reached out to get an old Berliner recipe for schalet (the German name for it). He told me that his family eats the “SPD — Standard Polish Dish.” It comes from the other side of his family, and he used the term tshulent reflecting this origin.

So, is Nino’s chulent an example of an Austrian (or Viennese) Shabbat stew, or is it a Hungarian one? In some ways, it is both! I might thus term it a 21st-century Viennese chulent. Most likely, the chulent that dominated in Vienna before 1930 would have been a significantly different dish, so Nino’s recipe doesn’t reflect that. At the same time, when those Hungarian Jews moved to Vienna and brought their stew with them, it more or less echoes the migrations of the dish throughout time and place. In fact, this is what my book primarily focuses on. You might, for example, best recognize a Polish version of the dish. But chulent did not originate in Poland; it reached there from France via Germany, when Jews fled persecutions in Western Europe. And it changed in Poland, incorporating new ingredients and flavors, over the hundreds of years of Jewish residence there.

Similarly, Nino’s stew seems to have changed slightly from its Hungarian origins. For example, he lists potatoes as an optional ingredient. In Hungary, sólet almost never has potatoes. In fact, the lack of potatoes is one of the tell-tale features of that version of the stew. Also, sólet tends to be fairly liquidy/soupy, and from Nino’s pictures (as you can see by the two featured on this page, which I took from his post), his appears to include less water or stock. It is conceivable that those differences reflect a more Viennese style than a Hungarian one.

Further complicating the picture, Nino pointed out that this stew represents the Ashkenazi community he knows, but that Ashkenazim are the minority of the Jews in Vienna. He told me that, back in the 70s or 80s, a large contingent of Bukharan and Persian Jews arrived. He laments that he has little contact with them, so he doesn’t know what their food is like. Presumably, they continue to make osh savo and chalebibi, or other similar stews from their home regions, as do immigrant Jews in the U.S. or Israel. But it would not be remotely surprising to discover that there were subtle differences in the Viennese versions of these Shabbat stews from their original versions in Central Asia. And in time, those alterations will probably increase. These, too, would be 21st-century Viennese Shabbat stews.

So in this single example we encounter many of the issues that have affected Jewish Food throughout history and around the world. These are the things that make Jewish Food so fascinating, and why I’m writing this book about that most Jewish of dishes, chulent.

If you’d like to help with this chapter, I’d appreciate it! I’m looking for good Shabbat stew recipes from the countries of Central Europe. I have Hungary covered, already, but I’d love recipes (particularly older ones) from such places as Germany, Switzerland, Austria, Czech Republic, Slovakia and Romania. Please be in touch, if you can help!